Now there are 3 statues of the legendary jazz artists situated on the coast of lake Bánk. You can visit these special statues out of the festival too as part of a pleasant trip. 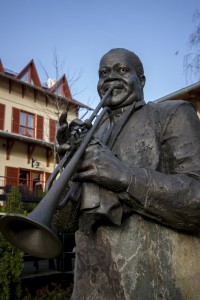 Louis Armstrong statue which is also the denominator of the festival it was inaugurated during the time of the first Louis Armstrong Jazz Festival in 2004. It’s situated in the garden of Tó Wellness Hotel.

Louis Daniel Armstrong (nickname Stachmo; New Orleans, 4th of August in 1901 – New York, 6th of July in 1971) American Jazz Trumpeter, singer, band leader, one of the biggest and most known musician of the jazz history.

The statue of jazz music’s giant was created by Győrfi Lajos – sculptor artist. He made it with love, empathy, and honour. The statue shows Armstrong in his middle-ages as he is playing trumpet.

The round face, huge vibrant eyes and the rythms of fingers make it the figure more alive. The instrument as vertical axis connects the 2 most liveliest centres the face and hand to each other. The trumpet, keys and fingers show an exciting formal dynamism.

The portrait is placed on a graceful  broken andesite rock in such a way that the holding of the trumpet doesn’t disturb the enforcement of the game face and the game of the fingers can be seen easily.

The figure is made by bronze. The pedestal is andesite, inscription of the statue is LOUIS ARMSTRONG.

The statue was created by Győrfi Lajos for the request of Swing Jazz Culture Foundation which  also provide financial resources of the festival.

Please watch our movie about the inauguration of statue and the Hungarian heritage of Louis Armstrong click here. 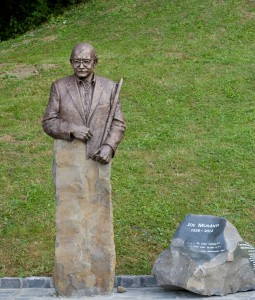 The statue of constant invited guest and host of our festival was inaugurated on the 10th jubilee of the festival in 2014. It’s situated front of the water stage on the coast of lake Bánk.

Joseph P. “Joe” Murányi (Ohio, 14th of January in 1928 – New York, 20th of April in 2012) Hungarian-born jazz clarinettist, composer and critic; the only and last white clarinettist of Louis Armstrong.

Joe Murányi’s statue also was created by Győrfi Lajos sculptor artist. He created it with big honour as the pair of the more than 10 years old Louis Armstrong statue.

The creation of the statue is the result of exemplary and intense unity. The council and population of Bánk also knew personally Joe Murányi so together – the Council, locals, Swing Jazz Culture Foundation, Tó Wellness Hotel and people (Karacsné Zagyva Julianna, Karacs Ferenc, Csík Gusztáv, Joan Faulkner, Scott Robinson) – by the initiation of Swing Jazz Culture Foundation they could provide the inauguration of the statue which had been created after 10 years of the inauguration of Louis Armstrong statue at the water stage of lake Bánk.

Bánk always occupied special place in heart of Joe Murányi. It’s true that he was born in Mezőkövesd but he also got the title of honorary citizen of Mezőkövesd on the water stage of lake Bánk. You can watch this in the movie of Louis Armstrong’s heritage in Bánk.

It was a big pleasure and honor for Karacs Ferenc the founder of Swing Jazz Culture Foundation and for Karacsné Zagyva Julianna, his wife that they could create eternal memory for the legendary uncle Joe the constant host of Louis Armstrong Jazz Festival which got place as the pair of Armstrong statue. The statue inauguration was an important milestone in the 12 years activity of Swing Jazz Culture Foundation. It preserves the Jazz festival’s memories and traditions with Joe Murányi for the future festivals.

The statue reflects Joe Murányi’s personality in a posture like him. Next to the statue there is title: The Jazz Festival of 2016 remembered a real jazz legend Oscar Peterson who was one of the most famous artists of jazz history. The Oscar Peterson statue was inaugurated by the initiation of Swing Jazz Culture Foundation as a special occasion on the first day of festival.

Bágyi Balázs-chairman of Hungarian Jazz Society, Willie Pickens-American pianist and friend of Oscar Peterson, and Prokai Gábor- leader of art department of Fine and Applied Arts also took part on the inauguration of statue and they commemorated about the artist in a short speech.

„At the beggining of  2000’s  a huge several tons stone block was pull out during the sweep of  lake which slept for millions of years in the deep. Each stone hides an enchanted, closed statue until it finds its own saviour sculptor. In summer of this year this stone was moved to Püspökladány where Győrfi Lajos sculptor artist and creater of the earlier 2 statues is living and creating, he had to evolve this closed statue. He turned the bulky, shapeless blocks of stone until he saw Oscar Peterson inside the stone the Canadian jazz- pianist.” – part of Prokai Gábor’s speech on the inauguration of statue

The creator of statues: Győrfi Lajos Győrfi Lajos (Karcag, 1960) graduated at Hungarian College of Fine Arts. His masters: Borsos Miklós, Rátonyi József. He worked in the artists’ colony of Tokaj and sculptor site of Mátészalka. He is the founder and director of stone sculpture site of Püspökladány. He had more than 50 national and own exhibitions, he took part on several Hungarian art exhibitions and also he is proud of his international exhibitions. The Hungarian Republic awarded him with silver cross of merit. He is the honorary citizen of Püspökladány and also he owns several esteemed awards.

This website uses cookies to make the browsing experience more efficient and enjoyable. By continuing to browse the site, you agree to our use of cookies.